Skip to main content
Benin: work in your own region

Thibault has been closely involved in our rice project in Benin since the end of October 2016. As a student in the International North-South Partnership he completed a 6-month internship at Uniriz-C. in Glazoué. He supports and evaluates the three groups that follow the training at Ferme SAIN, the training centre for young rice farmers. Discover how he experienced his visit here. 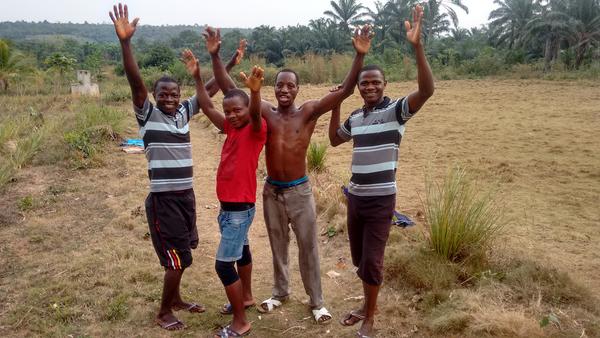 Two weeks at Ferme SAIN and the founding of the OJEAB 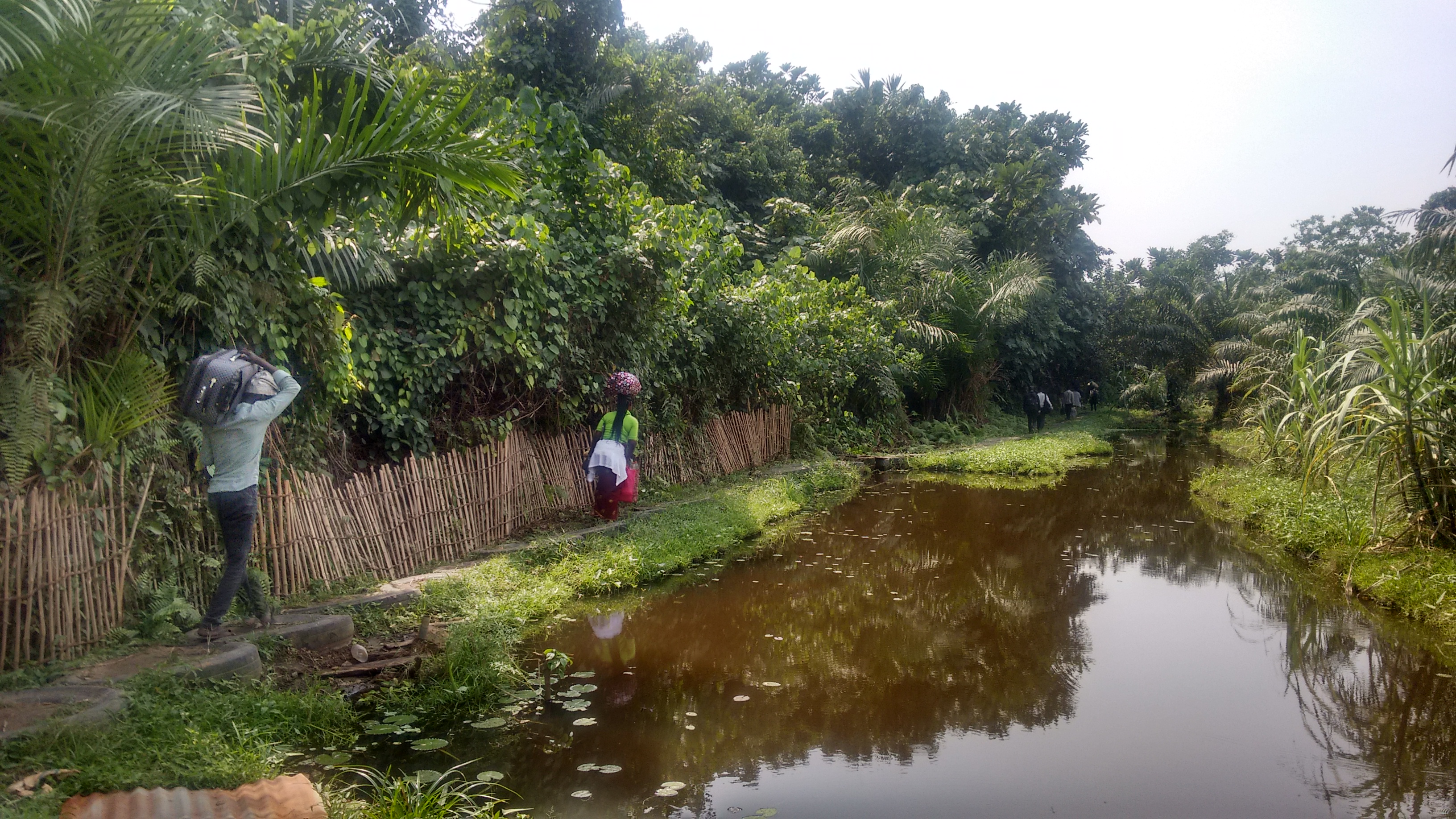 Groups one and two returned to Ferme SAIN in mid-January for training, but most of all to get to know each other better. The first week focused on fish farming and agro-ecology. It was then time for the first group to return home, while the second group stayed another week to finish off their training with a business plan. Besides being a practical course the aim was also to give the two groups plenty of opportunity to get to know each other better and to swap ideas. The spontaneous foundation of the OJEAB (Organisation des Jeunes Entrepreneurs Agricoles du Bénin) just goes to show what a success this was, and that these young people are facing the future with great courage but most of all as a team.

The young people hit it off immediately on the first evening, sharing their training experiences. They laughed about the strict instructors, imitating them with great energy. They recalled and shared their memories, and jointly decided on the menu for the coming week.

During the week, besides their practical training, the young people were also given the time to get to know each other: cooking together, a football match and some swimming in the Ouémé were the perfect recipe for a relaxed atmosphere, putting an end to mentions of group one and group two, and making more and more reference to “Nous sommes ensemble, ou bien?”.

Increasingly I heard talk of ideas on working together, until on one particular evening it was decided to set up an organisation. Once everyone had been able to present their own ideas a democratic decision was made on the name of the organisation. The OJEAB was born. The following evening there were similar democratic discussions regarding the logo and articles of association. Even to the extent that they took group three into consideration, who are to start their training in early February. 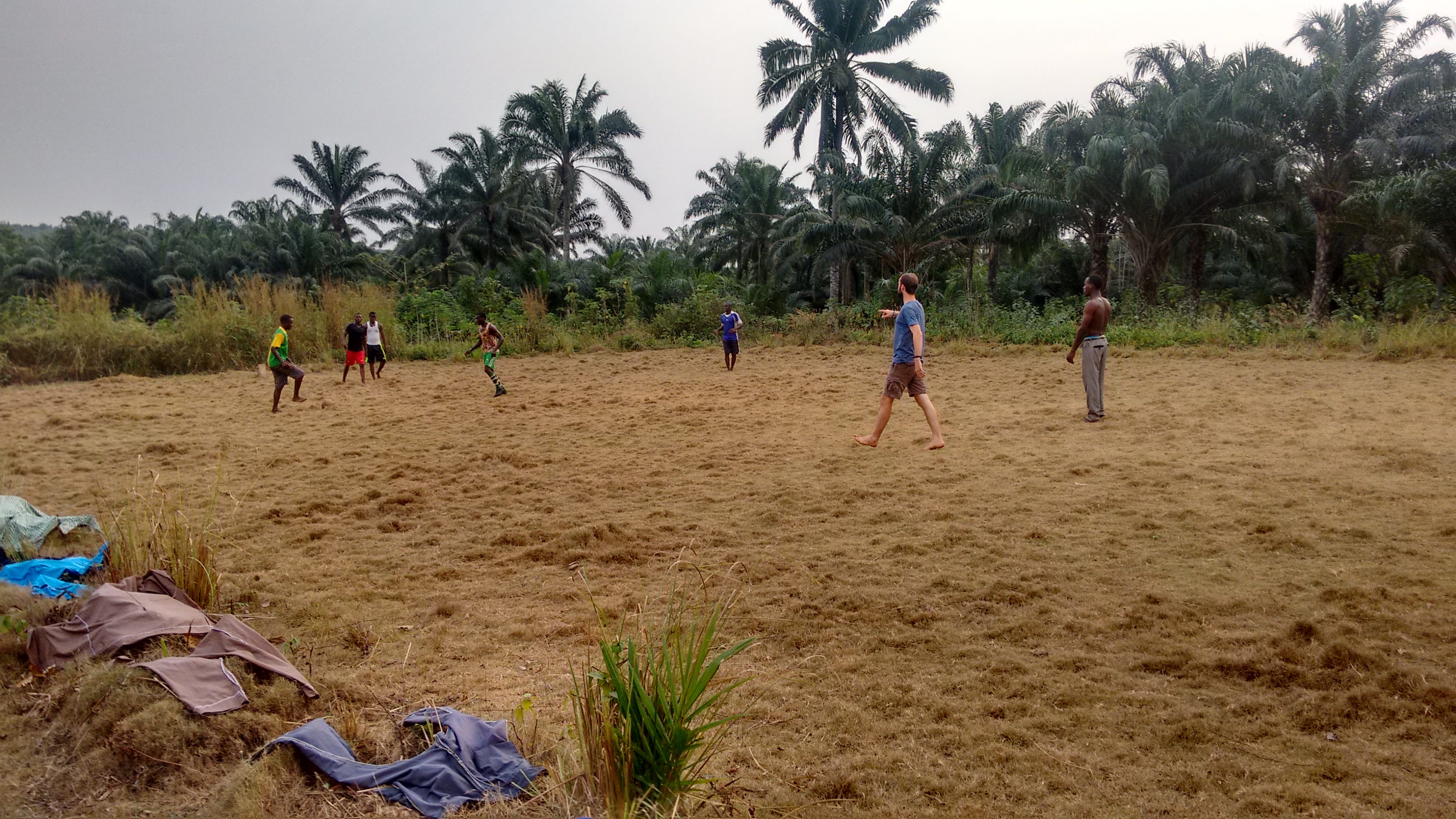 One aspect that was missing in the training and that the entire group was interested in was the matter of fish farming. So, in order to respond to that particular question, we organised a four-day course at Ferme SAIN. There the young people learned in a practical manner how to go about it.

After a short theoretical introduction they were supervised as they ran through the various phases of artificial reproduction. They learned to select the correct fish, about the process of insemination and how to monitor the larvae. They also visited a local fish farm, where they received plenty of practical tips from experienced fish farmers. This training will allow the young people to start farming fish for themselves. They can also pass on their skills in the local area.

The fact that the process of fish farming is covered in a relatively short time meant that we were also able to organise a workshop in agro-ecology. We started by explaining the meaning of GMOs (Genetically Modified Organisms). And we discussed the dangers involved. This was followed by a trip to the vegetable garden, together with the expert Lucien, to learn in practice how to keep soil and crops healthy in a natural way. The young people learned about things such as how to make their own natural insecticides using leaves from neem, papaya and garlic. They also learned how to restore the soil after disease (by planting onions), and a technique to nourish the soil with waste charcoal and manure. 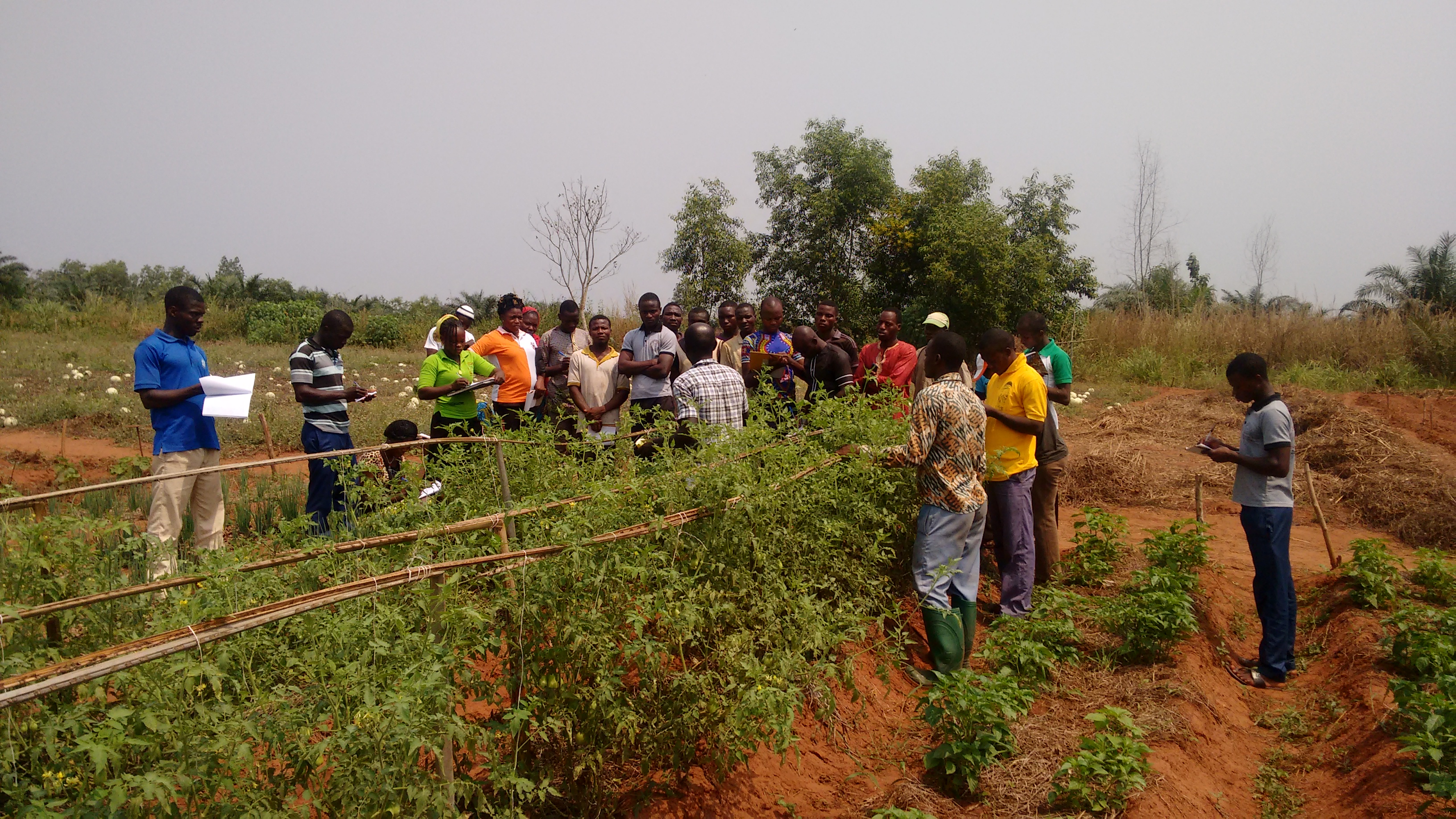 The young people listened attentively and could hardly believe their eyes. They learned many practical techniques that they will be able to use immediately, as there are few or no costs involved and because all that’s required is plentifully available in their surroundings. Lucien was not surprised when they asked him to come back later that week, which he also agreed to do. Group one left to get on with their own businesses, with a great feeling of satisfaction, not to mention as a member of OJEAB. 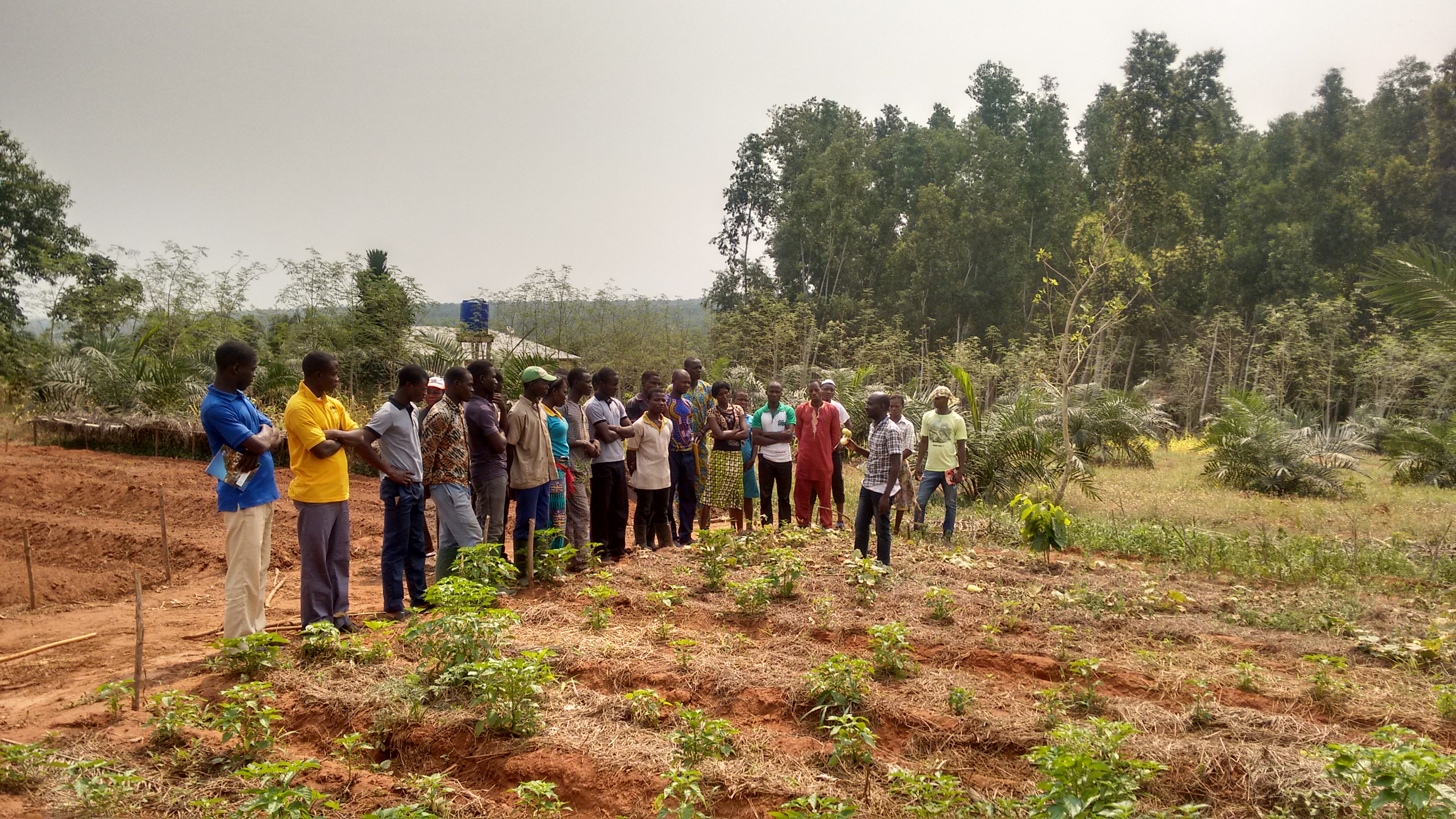 Group two stayed for an extra week to work on a business plan. They were first given some lessons, allowing them to set to work autonomously during the second half of the week. It was hardly a simple task to develop a plan for the coming five years. However, after a few days of blood, sweat and tears, and working late into Friday night, the young people headed home with a business plan.

Their training is complete. Now it’s time for the real test. A test that they will not have to suffer alone, but together with the other members of OJEAB and the local support person. I for one see plenty of potential and I look forward to visiting the young people again and having a guided tour.

Read more about our rice project in Benin or take an even closer look by watching the video of ambassador Jan’s immersion trip. 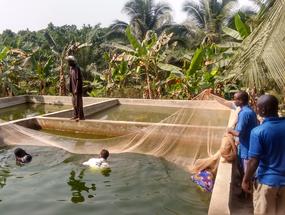 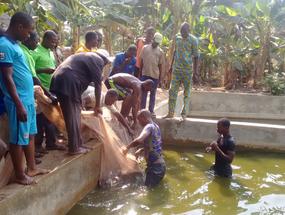 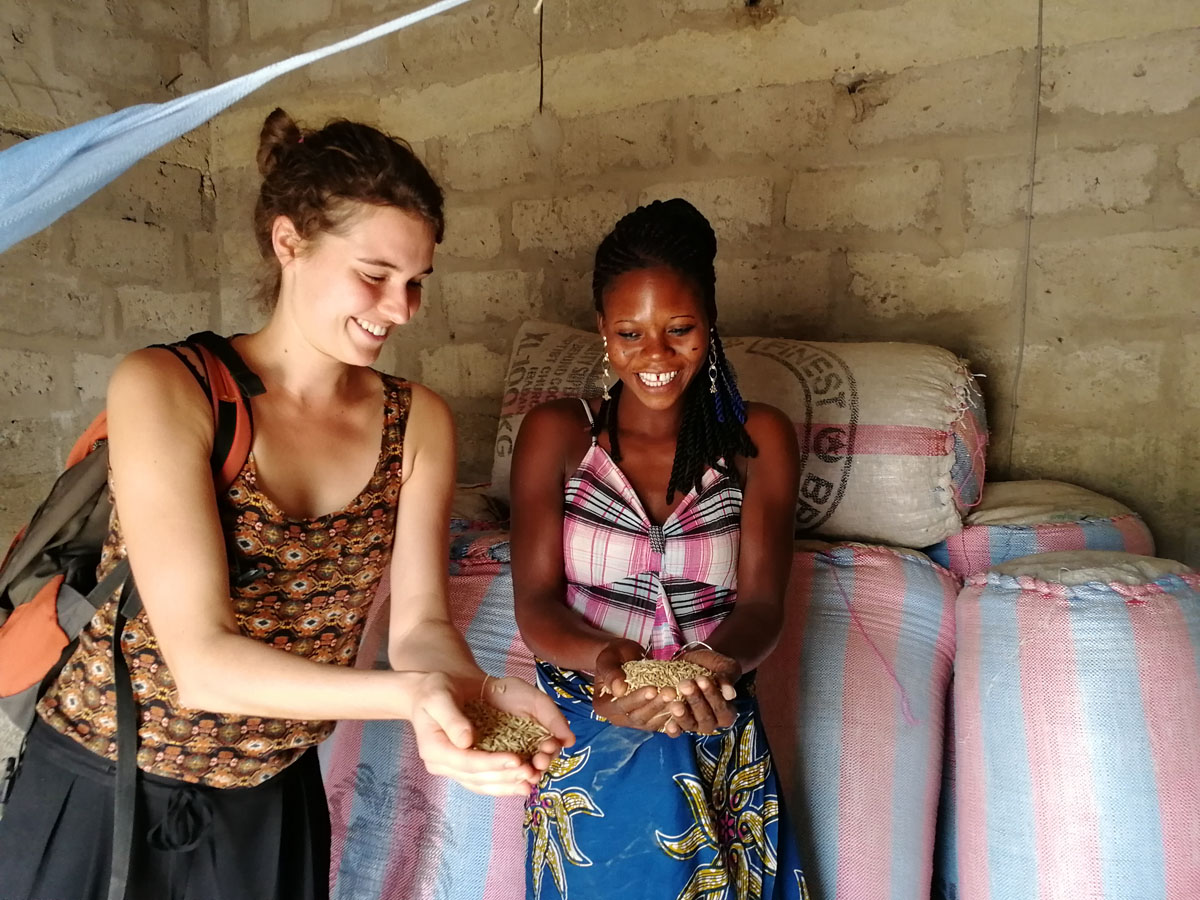 Marie Van Gool truly believes in the importance of education in the African countryside, and all the more so since her work placement in Benin.  In Benin she worked with young farmers who star 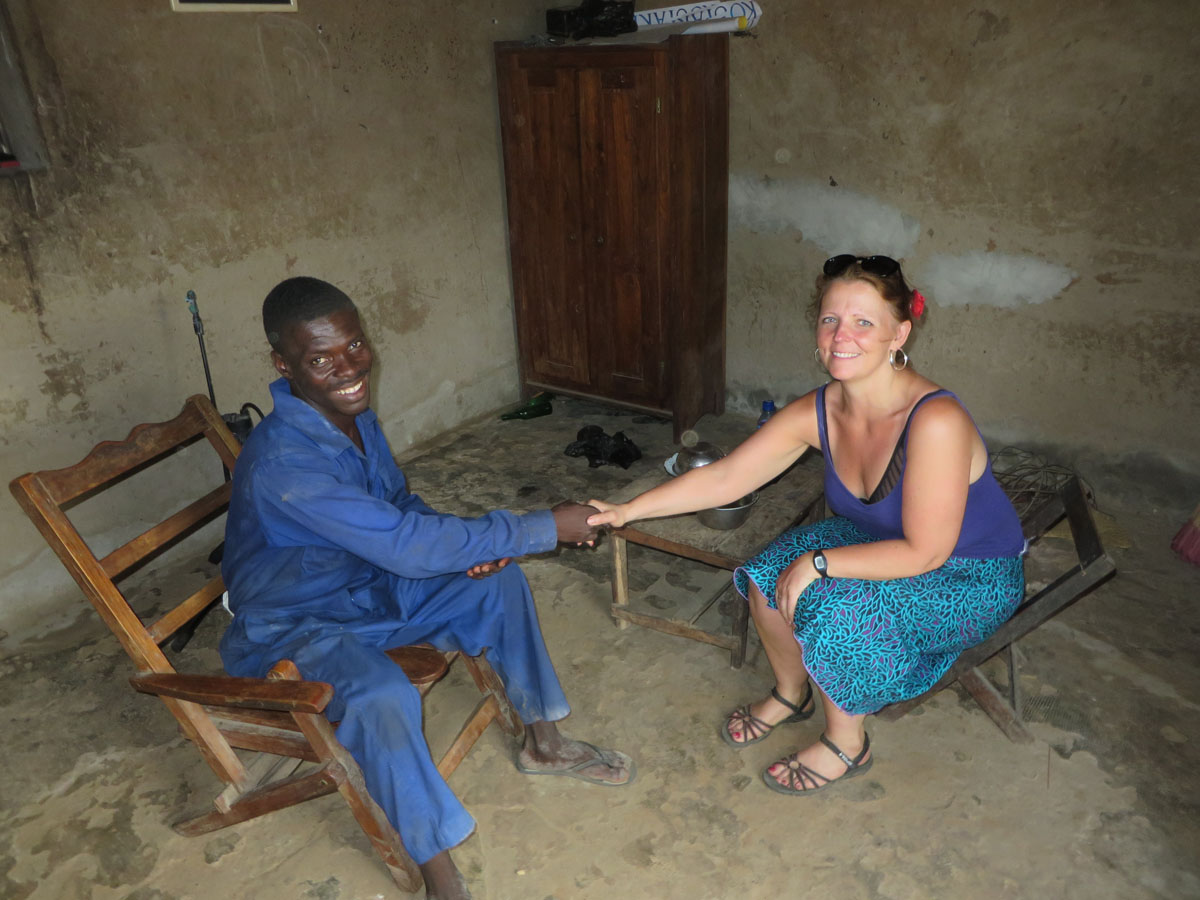 Do you remember Pierre, the young farmer from Benin? Thanks to his agricultural training, he was able to start a thriving farming business. He sent us a video to thank us. 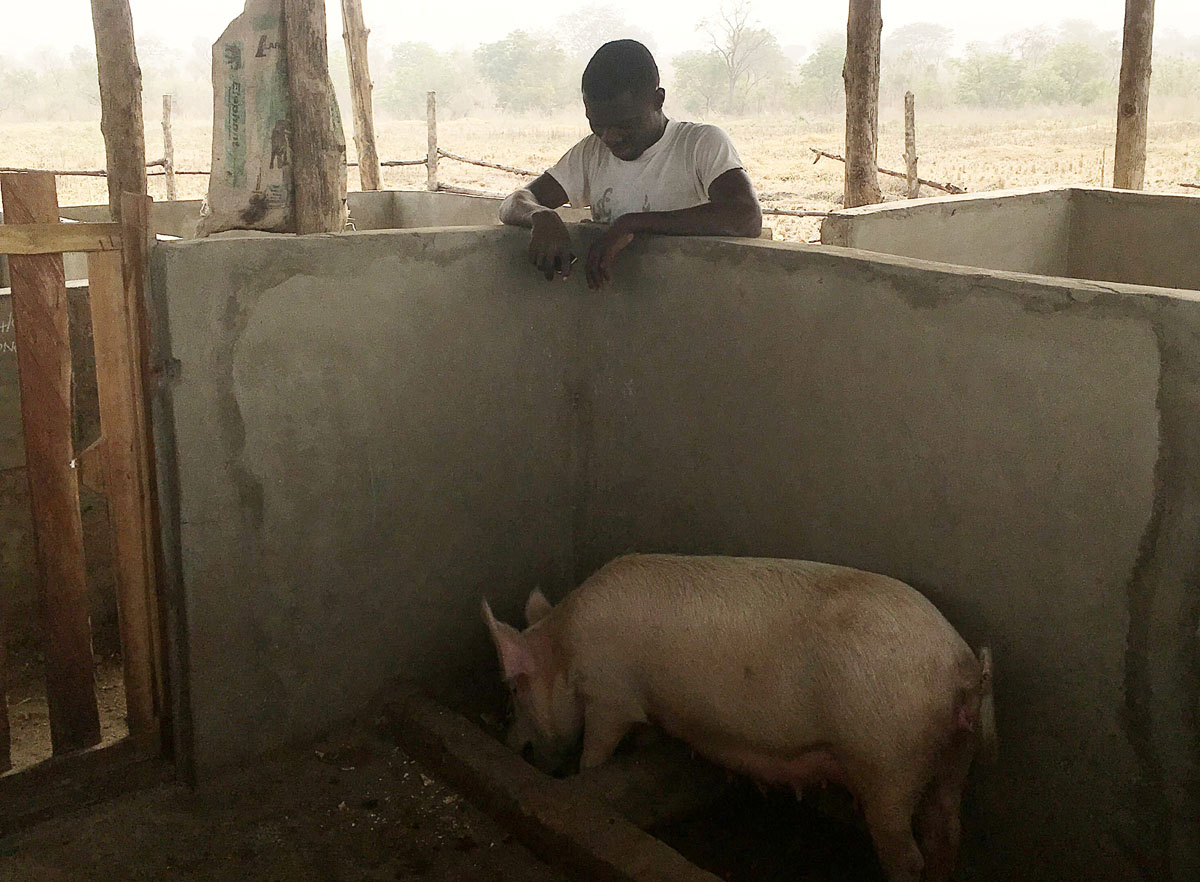 Update on Pierre from Benin

We recently met Pierre Akpinfa, a young, ambitious farmer from Benin. He followed an agricultural course in our project there. A visit to farmer Pierre

Life as a farmer in Benin is not always straightforward. Pierre Akpinfa, one of the young people in the project there, is proof of this. We visited him on his farm. From Benin to Tanzania

He worked in Benin for Collibri Foundation. Today, Thibault Geerardyn is trying to make a difference in Tanzania for project 'Wanted: food for the future'. 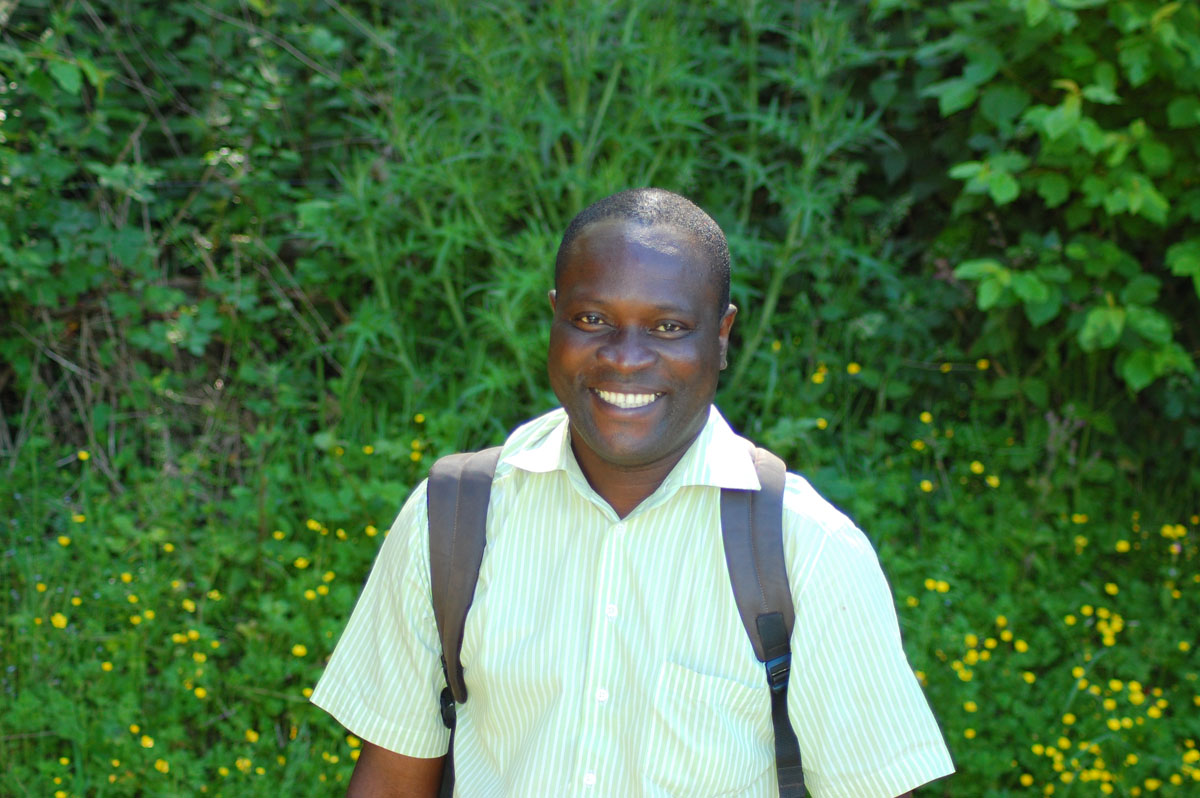 Benin: a reception with ambassador Jan

Pascal Gbenou, founder of the Sain Farm School in Benin: "I teach them farming methods. But not just that. I also teach them how to gain self-confidence." 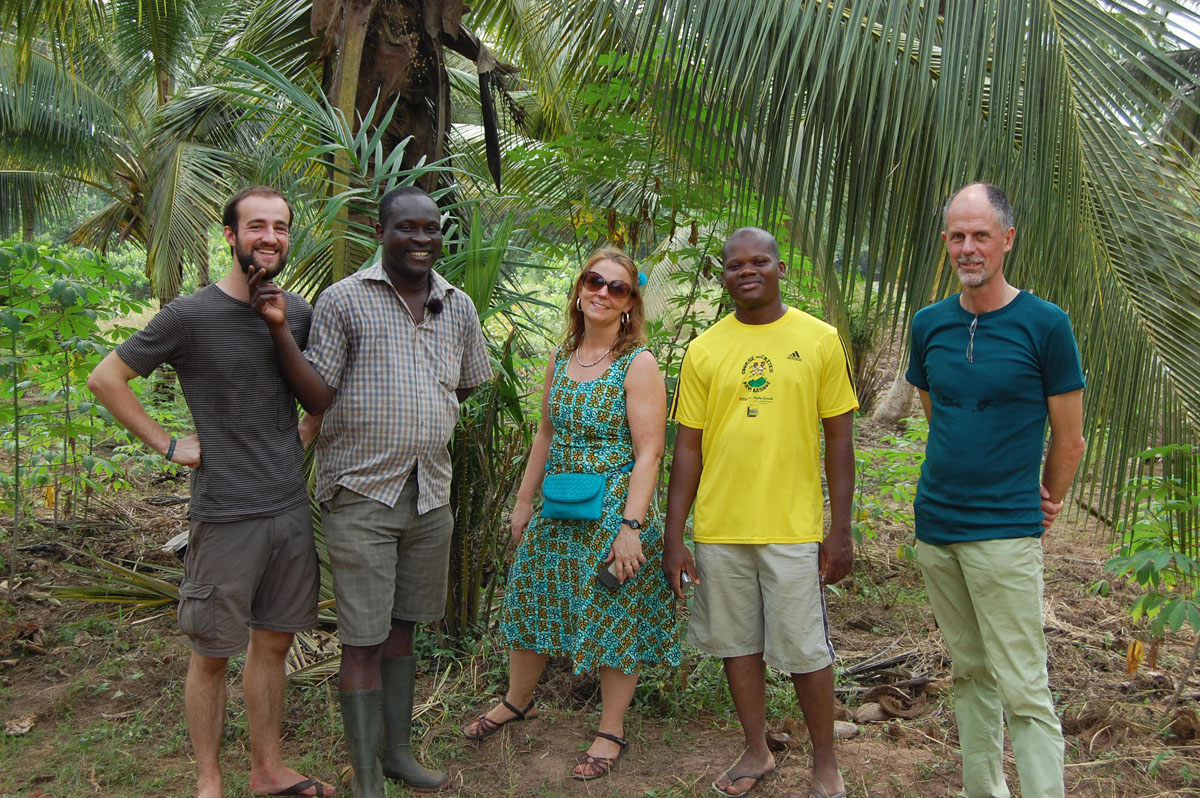 A 6-month work placement in a developing country; it does not sound obvious, but Thibault did it anyway. 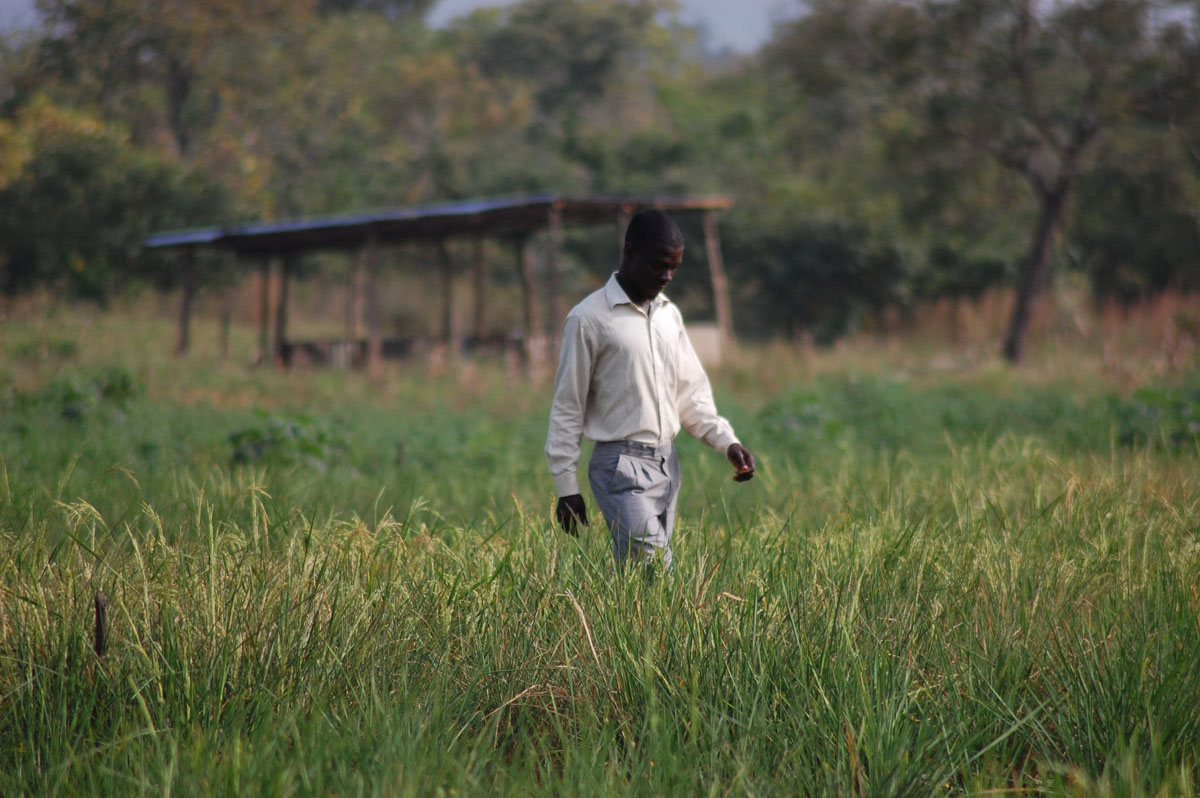 Ambassador Jan's immersion trip to Benin is over. He met the people working on our projects there. Relive his journey to Africa's armpit with his photos and videos.

View more
Benin: work in your own region- Private group -