Looking back on one year of BOOST

For hundreds of thousands of pupils, another school year ended in June. Secondary school students of BOOST also put pen to paper for their exams. Hassan Al Hilou and Haya Zamin are 2 of the 25 Dutch-speaking youngsters of the BOOST project. They look back on their first BOOST year and are looking forward to what's coming. "It seems like it all happened yesterday, that's how fast this passed by. Let's hope next year will be equally great and instructive", says Haya. 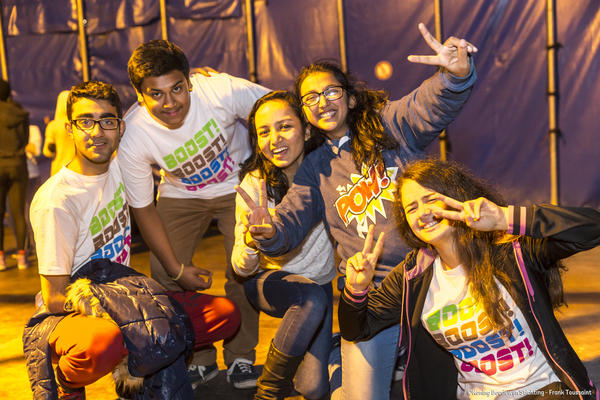 Thanks to BOOST, young people never have to face things alone. Hassan can endorse this: "With BOOST I immediately received the support from the group for my less strong points. I had requested coaching in French for instance, and since I took it weekly, my grades improved noticeably. My coach Els even sent me a good luck text before each exam", he says.

The BOOST youngsters attended several workshops and actively worked on their languages, self-knowledge, stress-immunity, etc. Things that increase their chances to succeed in higher education or on the labour market. "I learned a lot of things I could even use during this examination period. I had much less stress, didn't grumble that much and felt really motivated", Haya explains. Hassan confirms: "It was a path covering a complete school year, during which we became better and better at studying."

On to a careless summer

The summer perspectives of Haya and Hassan were undoubtedly an extra incentive to pass the last exams with flying colours. "A jury selected me to go to Berlin for three weeks in the framework of UWC Short Courses", says Hassan. "Without BOOST, I would never have known what that was. Now, I got to travel to Berlin and talk about society, culture and politics with people from all over the world", he continues. Haya also travelled, to England for a language course.

"A big kiss for everyone"

Hassan is really looking forward to the future and he wishes the same for BOOST. "I really hope BOOST will continue to grow. Everyone deserves such a chance", he says. "We hear all about the BOOST youngsters, but there are also so many people who help us: the King Baudouin Foundation, the Collibri Foundation, Els Tijskens, Jef Colruyt and so many more people behind the scenes. A big kiss for everyone, because they all deserve our thanks!"